Move over Sling TV, DirecTV Now, PlayStation Vue and pretty much every other online TV streaming service: YouTube, the first king of Internet video, is getting into the TV subscription business.

At an event today in Los Angeles, the Google subsidiary unveiled YouTube TV, billing it as a way to reimagine television for the YouTube generation. In practice, it looks a lot like the streaming services that have entered the market before it, but with a healthy dose of trademark Google simplicity and powerful artificial intelligence behind the scenes.

YouTube TV will cost $35 per month when it becomes available later this year; the company didn’t offer an exact release date. That subscription price will get you six individual user accounts, each with their own profiles and suggested content.

As for what that content is, YouTube appears to have pushed hard against the major TV networks’ arcane distribution rules to offer as much local and national broadcast as possible. You’ll get live national streams of ABC, CBS, FOX, NBC and ESPN, as well as some regional sports networks and cable channels. 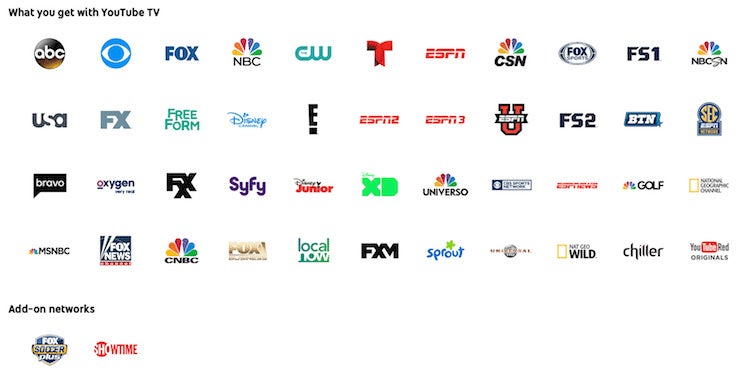 There’s no full list yet, and YouTube CEO Susan Wojcicki explained that the company is launching the service first in areas of the U.S. where it can offer full local live programming. That said, there are a few channels you can definitely count on, in addition to the national broadcast staples. On the sports side, they include Fox Sports Networks and Comcast SportsNet, and you’ll be able to add Fox Soccer Plus for an additional fee.

The news category includes MSNBC and Fox News. For kids, there’s Disney Channel and Sprout. Drama and reality fans get USA, FX, E! and Bravo, and they can add Showtime for an additional fee. In total, YouTube TV will have more than 40 channels available, in addition to all of the original films and TV series from the current YouTube Red subscription service.

YouTube TV subscribers will be able to watch the local broadcasts of whatever city they’re currently in. If you live in Denver but are traveling to Philadelphia, for instance, you’ll see Philadelphia’s local channels but not Denver’s when you fire up the app.

As for navigating the content, YouTube TV’s primary interface will be a smartphone app with three tabs: “Live,” “Library” and “Home.” You can find shows, movies or live broadcasts to watch by searching for their names or via keyword. Typing in “time travel,” for instance, will pull up all available content with that theme. 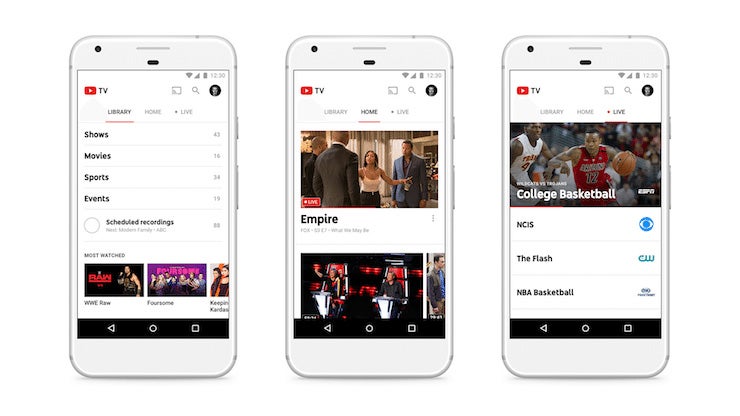 When you find something you want to watch, you can either pull up a full-screen viewer within the app, or cast the video to your Chromecast-compatible TV. Each of the six subscription accounts will also include access to their own unlimited-storage DVR, which can record shows based on your favorites. Add “Los Angeles Lakers” to your favorites list, for instance, and the service will automatically record all Lakers games. You’ll be able to fast-forward and rewind them, too.

“There’s no question that millennials love great TV content, but what we’ve seen is that they don’t want to watch it in the traditional setting,” Wojcicki said.

Of course, YouTube TV cannot overcome some hard-and-fast rules of the traditional TV setting: you won’t be able to watch live NFL games on your phone, for instance, though you will be able to cast them to your TV.

YouTube TV will also include one of the most annoying parts of the TV watching experience: ads. YouTube says it has big plans for making ads relevant, and there will be a mix of the ads you see on the free version of YouTube and the ads that traditional TV subscribers see.

There are a few big questions that YouTube declined to answer at today’s unveiling, the biggest of which is the specific local markets where YouTube TV will be available. But based on what we know right now, it looks like a compelling cord-cutting option with features including a DVR subscription and a sub-$40 price point that take it a cut above the competition.